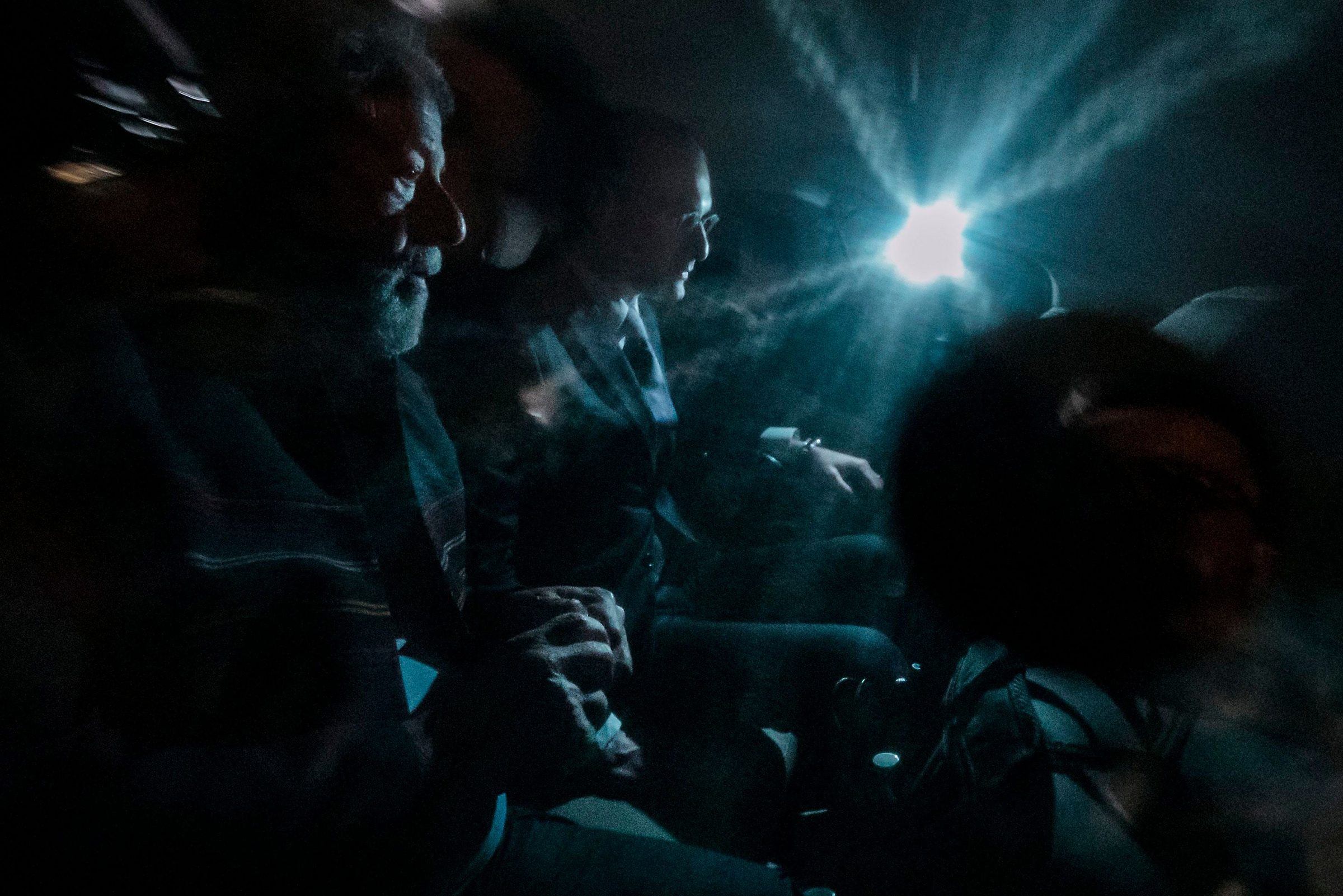 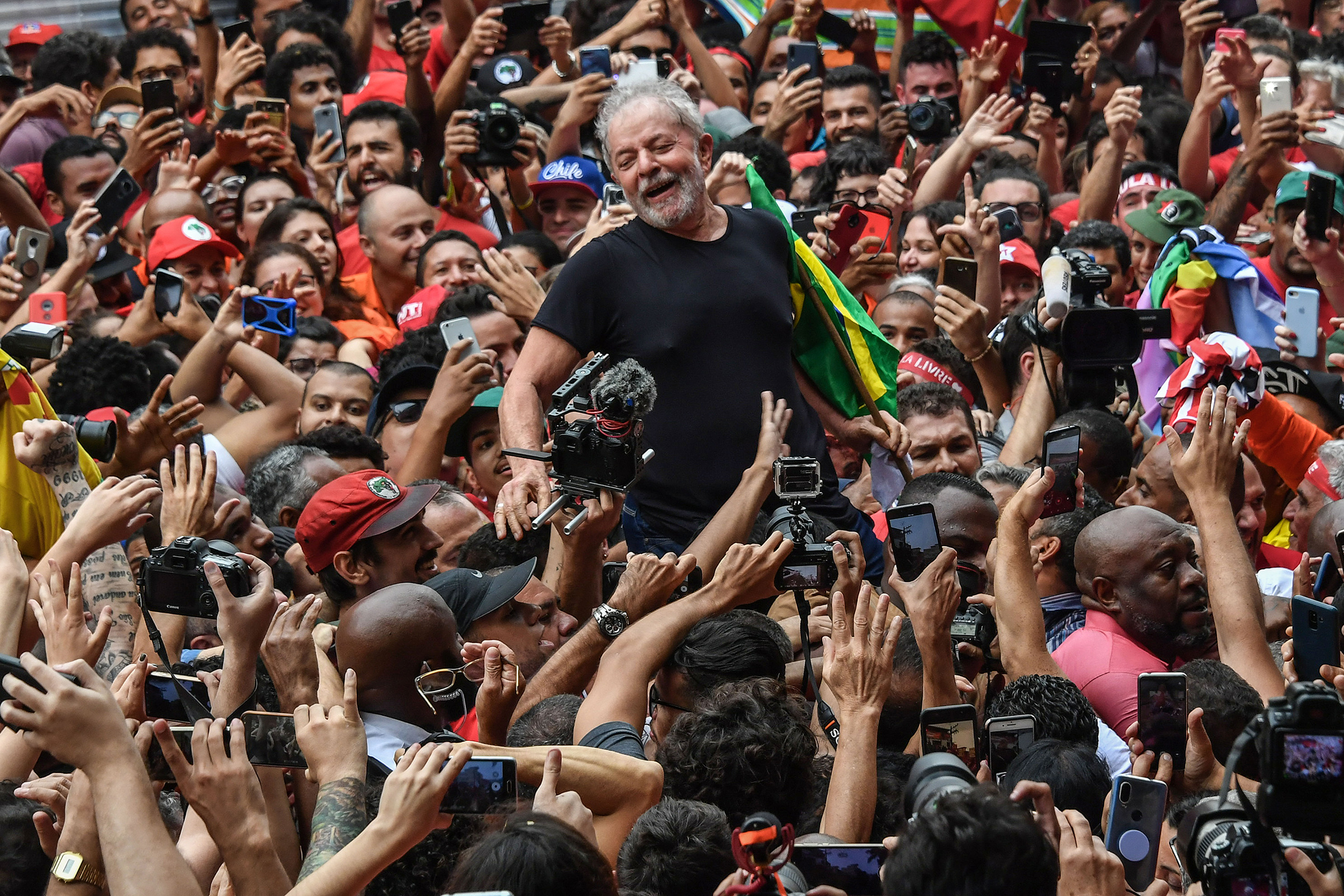 A crowd of supporters carries Lula during a gathering outside the metalworkers’ union building in São Bernardo do Campo, in São Paulo, Brazil, on Nov. 9 2019, after the former president was released from prison.
Nelson Almeida—AFP/Getty Images

How will you do that?
We need to create a new global governance. Today’s United Nations doesn’t represent anything anymore. The U.N. isn’t taken seriously by governments today, because each one makes decisions without respecting it. Putin invaded Ukraine unilaterally, without consulting the U.N. The U.S. is used to invading countries without asking anyone and without respecting the Security Council. So we need to rebuild the U.N., to include more countries and more people. If we do that, we can start to improve the world.
In Brazil, during the pandemic, the Black population had a higher risk of death than white people, and a higher unemployment rate because of the pandemic as well. And Brazil’s police-violence problem has only worsened during the Bolsonaro government. What will you do to improve the world for Black Brazilians specifically?
I read a lot about slavery when I was in prison. And sometimes it’s difficult for me to understand what it means to have had 350 years of slavery. It’s difficult for me to understand that slavery is in people’s minds. And on the outskirts of Brazilian cities, we have thousands of young people dying almost every month, every year. It cannot continue. When I was President, we enacted a law to tell African history in Brazilian schools. So we would not see Africans as inferior people. So you know, we have to have this type of education at home and in schools. But Bolsonaro woke up hatred, prejudice. And there are other Presidents in Europe, in Hungary. A lot of fascists, Nazis, are popping up across the world.
Is Bolsonaro to blame for racism in Brazil?
No, I wouldn’t say he is to blame for Brazil’s racism. It is chronic in Brazil. But he stimulates it.
You have gone through a lot of personal tragedies in the last five years. Has that changed you in any way?
No. I would be lying if I told you I wasn’t wounded, that it didn’t make me very nervous when the liars mounted this scheme to convict me. I was aware of what was happening in Brazil, I knew that the reason for Dilma’s impeachment had to continue. I mean, it made no sense to impeach Dilma, and two years later, I would be President again. So of course, they had to take me out of the game. But they had no reason. They cannot stop me from running for President. So what did they do? They set me up, they framed me using lies. To put me in jail. Now I am free and all of my trials have been annulled.
Yes, the convictions have been annulled. But how did that period impact you?
I spent 580 days in jail. I read a lot. I reflected a lot. I was prepared to leave prison without feeling any resentment, only remembering that it was a part of history. I cannot forget it. But I can’t put it on the table every day. I want to think about the future.
For you to understand my life, I only ate bread for the first time when I was 7 years old. My mother, many times, didn’t have anything to put on the stove for us. And I never saw her desperate. She always said: “Tomorrow we’ll have enough. Tomorrow will be better.” And that was ingrained in my consciousness, in my blood. That’s how I am. There are no problems you can’t overcome.
I feel proud to have proven that a metalworker without a university diploma is more competent to govern this country than the elite of Brazil. Because the art of government is to use your heart, not only your head.
You’re getting married soon. Can you talk a bit about your fiancée?
I don’t like to talk about her. She can speak for herself.
Have you learned anything from her?
I have. When you lose your wife, and you think, well, my life has no more meaning. Then suddenly, this person appears who makes you feel like you want to live again. I’m in love as if I were 20 years old, as if it were my first girlfriend. I am going to get married in the most peaceful way possible, and I’m going to run a happy campaign.
A guy as happy as I am doesn’t have to rage, doesn’t have to speak badly about his opponents—let them do what they want. If I can, on the campaign, I will speak only about love. I don’t think it’s possible to be a good President if you only feel hate inside you, if all you want is revenge. No, you have to think about the future. The past is over. I will build a new Brazil.
Write to Ciara Nugent at ciara.nugent@time.com.