Only 60% of Instagram accounts are estimated to be real people
Top celebrity influencers have lost millions of Instagram followers over the past 14 days, HypeAuditor data reveals.
The AI analytics platform asserts that this bleeding of followers does not indicate a feared abandonment of influencers by their fans, and is a deliberate approach from Instagram in an effort to rid the platform of bots and fake followers.
In the seven days between September 6 and September 13 2022, a staggering 13.5 per cent of all Instagram accounts measured a drop in their number of followers. Accounts that boast a follower count of 100,000 to one million followers make up for 31.5 per cent of all accounts on Instagram were disproportionately affected by the targeted purge than smaller accounts (followings between 1,000 and 5,000).
Below is a list of the top influencers on Instagram that have lost several million followers in a few days, as gathered from HypeAuditor: 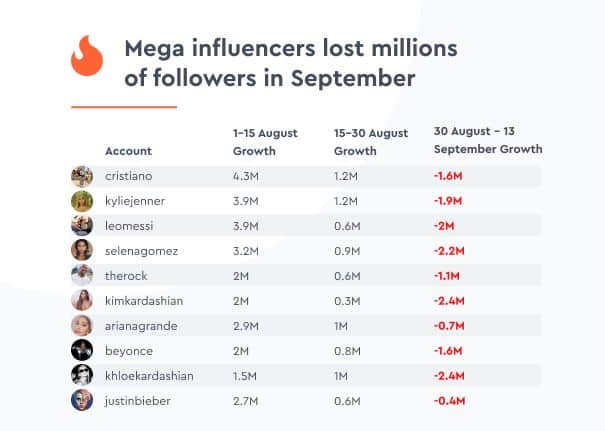 Alex Frolov, CEO and co-founder of HypeAuditor assured legitimate celebrity influencers that the decline in numbers is not a negative, saying: “The loss of followers should not be a cause for concern for influencers or the brands they work with – quite the opposite. The massive loss of followers that stars like Cristiano Ronaldo or Kim Kardashian are currently experiencing does not mean that millions of fans are giving up their loyalty.
“Instead, we suspect the origin lies with Instagram itself. Such a purge of inactive or fraudulent accounts is nothing new. Other platforms such as Twitter or YouTube also run these from time to time to reduce the amount of inauthentic activity.”
Frolov made the stunning statement that only 60 per cent of all Instagram accounts belong to real people, with the rest being bots or inactive accounts. He said: “It only makes sense that Instagram should also remove mass accounts like these.”
The title of biggest Instagram influencer belongs to football superstar Cristiano Ronaldo. His 476 million follower count fell by 1.6 million in just two weeks, with stars of an unmatched celebrity such as Kim Kardashian recording a loss of 2.4 million followers in the same time frame.